Weekends are a Wonderful Thing

Maybe my mom was right. My mom said you need to work in order to appreciate vacations. Maybe a weekend is the same thing.

Weekends at our house – whether we have plans or we don't – are always a wonderful thing and maybe they are that way because we try to jam in so much quality time.

This weekend it was a stay-at-home, no-plans type of weekend and as such construction continued at our house.

Last week, my husband took down a wall that separated our dining room from our kitchen making our open-concept house more open. This weekend, he started to build us an entranceway closet. 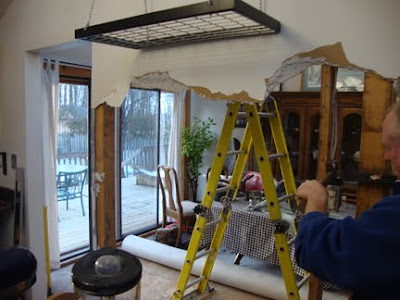 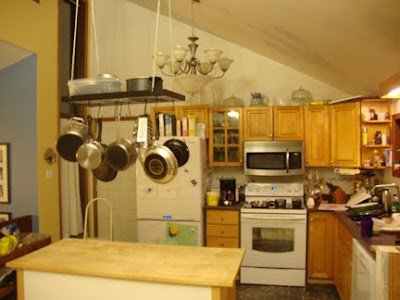 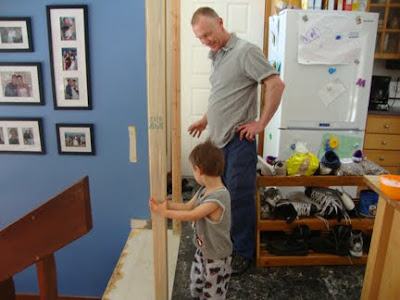 What Viceroy homes have in high ceilings and views, they lack in wall space and storage areas. As such, we usually throw our jackets on my hope chest, which is handy, but annoying.

Now we will have a place to hang out jackets, and hide our shoes, right when we walk in the door. It's a wonderful thing. 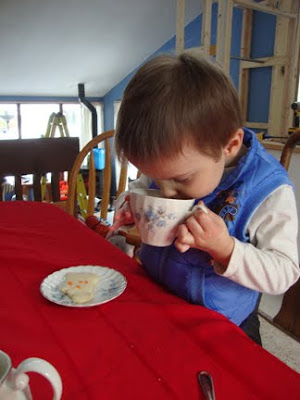 We also had time to have a tea party using a real tea set, courtesy of my Grandmother, and of course cookies. Our guy had his first “real” tea, non-caffeinated herbal tea. Usually I make him a “tea” of lemon juice, honey and water. E enjoyed pouring in the milk and sugar. 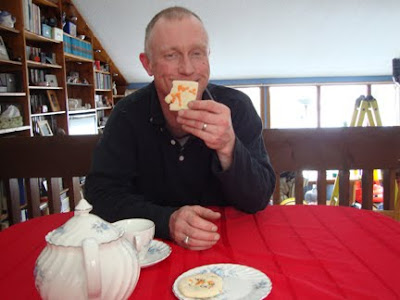 We went for a walk in the ice and played some hockey, then came back and went on the teeter-totter and swung on the tire swing. The night before we had a campfire with toasted hot dogs and raw marshmallows and then slept out in the shed. It was like a summer weekend, but with snowpants and mittens. 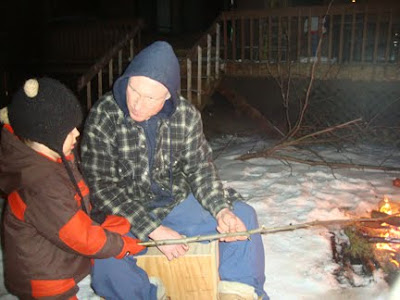 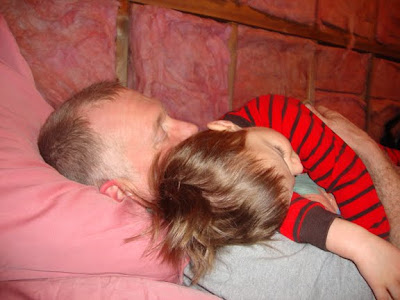 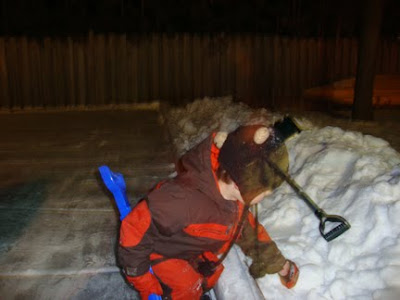 What did you get up to this weekend?
Posted by LisaDay at 4:52 AM 4 comments

Have you Seen Birds? (Title taken from a fabulous kid's book)

Not just one, but a handful flying, playing, singing and chasing each other through the trees and in the puddles.

And while I am happy to see and hear these beautiful birds, I worry. The Robin, and the red-winged blackbird, are signs of spring.

And while I would love for spring to come, I am worried that winter will offer it's final blast and I – and the Robins – won't like it.
Posted by LisaDay at 2:46 AM 4 comments

Email ThisBlogThis!Share to TwitterShare to FacebookShare to Pinterest
Labels: feels like spring, robins, robins are back, signs of spring, winter's final show

Our Weeks in Pictures

We have had a fun two weeks. Here is our life in pictures:

Sleeping in the clubhouse 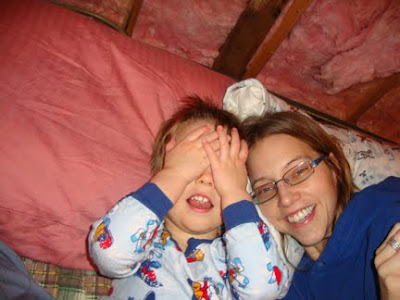 My brother- and sister-in-law slept in the shed the night of my husband's birthday last week and since then we have done it twice. Our guy would like to do it nightly. 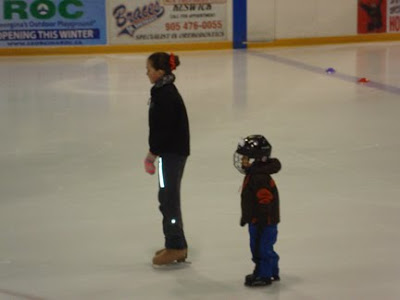 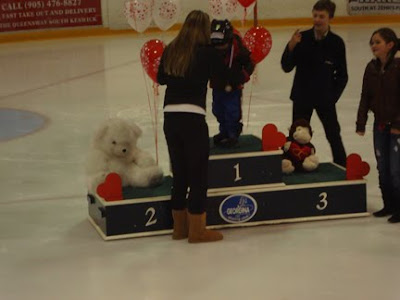 My guy had his first skating competition last Saturday. He was announced; skated by himself (including going backwards, jumping and turning around); waved and blew kisses to his fans; and then stood on the podium to get his first-place medal. It was fantastic.

Skating on the lake 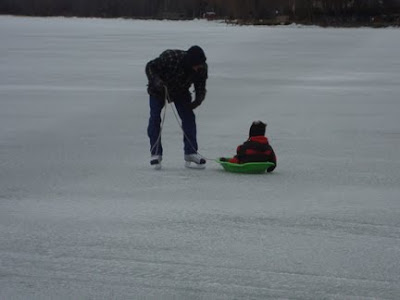 While the warm weather didn't help our backyard rink, it made the ice on the lake beautiful. We spent several hours on the ice both on sleds and on skates.

My brother and I had a race. I had a 20-foot head start and he skated backwards. He won. I was proud I stayed on my feet. 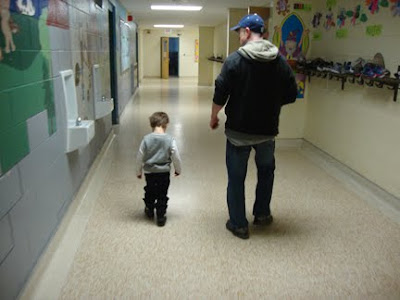 My guy was registered for kindergarten last week. It might have been the kindergarten room filled with toys, the gym and the stage or the playground, but E talked about his school for the rest of the weekend. 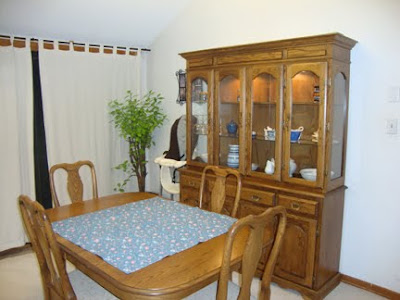 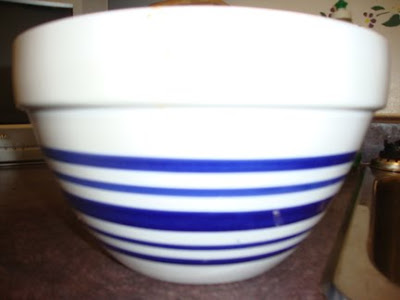 My good friend, AC, gave me this bowl – which always reminds me of the bowl from Anne of Green Gables - as a wedding gift. There has been a crack in it for years but last week the bowl gave out. Goodbye, beautiful bowl. I miss you.
Posted by LisaDay at 5:29 AM 6 comments 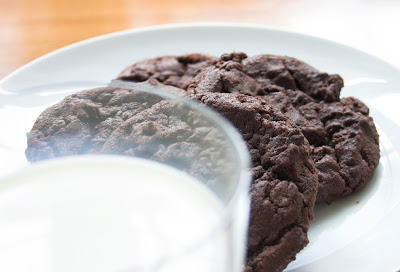 On the news this morning there was a story about a study done in Israel that showed people who ate cake in the morning lost 40 more pounds than those who did not.

I am a believer of the effective, but not popular, weight loss method of a normal diet and exercise, however, this study caught my ear.

I love baked goods. I find I crave homemade cookies and brownies in the morning. I would be quite content to eat my cereal with a side of chocolate bar.

According to the researchers, those who ate a slice of cake with breakfast, spiked their metabolism and then had the day to wear off the calories.

When I don't have baked goods to eat on the way to work, or avoid sweets throughout the day, I tend to eat a lot of junk I don't really want when I get home.

So tonight after work, my guy and I are going to bake a second batch of granola cups found at Mommie Cooks (delicious and fun) as well as a batch of chocolate chip cookies so I can test the theory.
Posted by LisaDay at 4:51 AM 2 comments

On Monday, a story broke about a car accident in a small town near Stratford, Ont. Being billed as one of the worst accidents in Ontario's history, it involved a flat-bed truck and a passenger van. Eleven people died.

The coverage of this accident was lengthy. A reporter was already at the scene and was talking about the area as well as describing the scene itself.

CP24, we are not CNN and for that we should all be grateful. CNN, and CP24 apparently, should be ashamed of the way they are covering news. They take a story and then have to make news up to fill the 24-hour coverage they have slotted for it.

I like info, but no story, particularly a breaking one, has enough information to allot it that much time. It becomes entertainment and news - especially disasters and tragedies - are not entertainment.

Perhaps CP24 instead, could have used their coverage time to explain to city folk the ways of the country. The passenger van was carrying migrant workers. Farmers, so city people know, hire migrant workers to work their fields.

New stations covering this story have made a point to mention the passenger van was filled with migrant workers each time this story comes up.

Why? What difference does it make who was in the van. They were people. Would it make it more or less sad it it was a van full of tourists or a van full of Canadians?

Journalists, think of your words. There is a reason why people distrust the media and this is it.
Posted by LisaDay at 2:51 AM 3 comments

How Did this Happen? 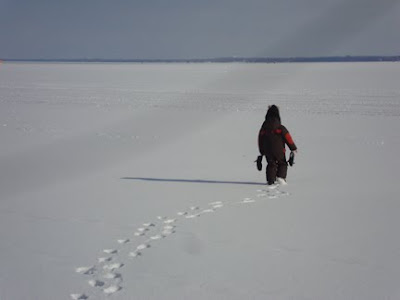 Friday we register our son for kindergarten.

How is it that our little guy is at the age where he is going to school?

When I first realized our three-year-old will be getting on the school bus like the “big kids”, I was so sad. While I acknowledged he was likely ready to go mentally, there were a list of things he still isn’t able to do and a whole bunch of things I hadn’t yet taught him.

While he can get dressed himself, he can’t zip up his coat and he still puts his shoes on backwards. While he knows to stop at the edge of the road and look both ways before he crosses, we still need to work on letting other people talk despite having something important to say.

He still likes to nap. We leave the house at 6:10 a.m. This works out because he has at least a two-hour nap during the day. His kindergarten is all day every day. My poor guy is going to be tired.

And then there is school itself.

When my stepdaughter lived with us, it seemed like each week she was asking for money – school trips, fundraisers, pizza lunch.

My guy doesn’t get a lot of stuff. We don’t go to the grocery store and buy him a treat. On our recent Belleville trip, we went into many stores – toy, hobby, book – and he saw many things he wanted but he didn’t get anything.

But the school system seems to not only want your money, but makes you feel pressure to give your child everything because everyone else is doing it.

I suppose I will cross the money issue when it comes but I am feeling better about kindergarten readiness as two friends both told me the children don’t have to be completely self-sufficient, that there are parents in the classroom who help out.

So while I will be a little sad that my guy is starting a new chapter in his life, it will also be exciting to watch this little boy grow up to be an even bigger boy. 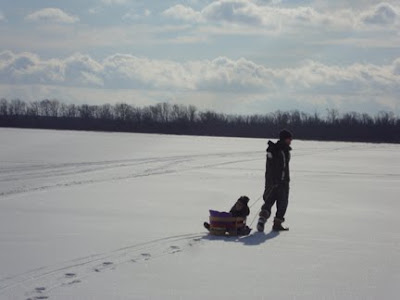