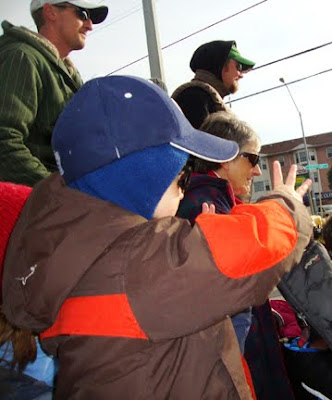 Santa came to the nearby town on Saturday. It was E’s first parade. He loved the people who gave out chocolate and candy canes.

He waved to the firefighters and police officers and he fell asleep to mommy rocking (literally rocking not rocking out) to the music.

He stayed asleep through the marching bands, to driver blowing his big rig horn and to Santa wishing each of us a Merry Christmas. 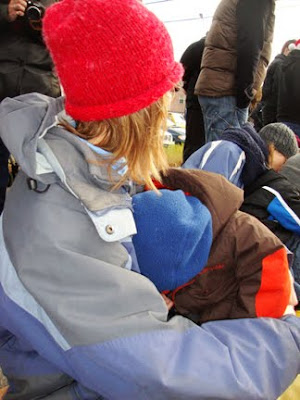 The parade itself was OK.

I was disappointed by the local stores that used the parade as a marketing vehicle rather than a Christmas parade to get us into the spirit.

If people can’t put effort into their floats, do not bother attending. So to the local florist, the larger grocery store and the trailer rental place, don’t participate next year. Find another way to advertise your business.
Posted by LisaDay at 4:42 AM 7 comments 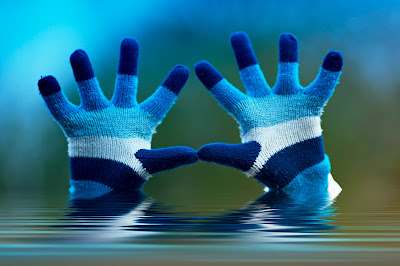 My little guy hates bundling up for the snow. I don’t say I blame him.

Last year he was moving much better than the year before but it’s hard to walk, never mind play, when you have bulky snowpants and jacket, boots and mittens that never stay on.

Summer is much easier.

As the temperature has dropped this fall, my guy refused to put on his mittens despite cold hands and fingers.

He told me he wasn’t going to wear mittens until there was snow.

Well little guy, it snowed last night. Welcome back mittens.
Posted by LisaDay at 5:07 AM 3 comments

Move Over Chinese Pre-Folds, There is a New Cloth Diaper in Town

Readers of this blog will know I love using cloth diapers, and I don’t hesitate to tell anyone I talk to that they, too, should go cloth.

My guy has been toilet trained for months. He does, however, still use diapers during naptime and overnight. And because E is a heavy wetter, he uses disposables during those times.

So when I received an email from Mohammed at Lil Helper asking if I still used cloth diapers and if I would be willing to try his version, I jumped at the chance.

If Lil Helper’s diapers would keep E dry, I would buy a set.

I wish I could have captured E’s expression when I put on Lil Helper’s charcoal bamboo cloth diaper. 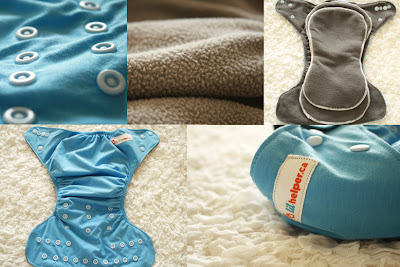 Super soft, the diaper and its two bamboo inserts with seven layers of absorbent cloth, stayed in place with snaps.

Mohammed also provided me with additional cotton inserts that went inside the diaper. Snaps are also used to keep the diaper on.

Last night, while getting ready for bed, he asked to wear his Lil Helper diaper. We plan to try it during naptime on the weekend.

I think for a child who is not a heavy wetter, these diapers would work wonderfully. If I discovered Lil Helper before E was potty trained, I would have bought them. If we ever have more children, Lil Helper is where we will turn to.

In addition to being beautifully made, Lil Helper’s diapers are:

* All In Ones. You do not need to buy an additional diaper cover.

* One-size fits all. The same diaper will fit your baby from seven to 35 pounds.

* The outer layer is made from waterproof, yet breathable materials.

* Through Lil Helpers Baby Do Good program, for every three diapers purchased by its customers the company pledges to gift a new cloth diaper to a family in need.

* Mohammed and his family are down-to-Earth, easy to talk to and funny. Nader is also an owner and founder of this company. Both men and their families live in Toronto.

I have started listening to Christmas music in the car on the way to and from work. 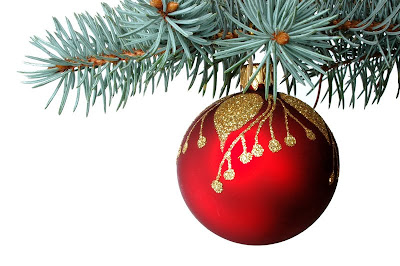 Giving Credit Where Credit is Due

You know, you have to give Canadians credit. If I saw someone like this walking down the street, I would do a double take:

Instead, most people just walked by me on Halloween. Some looked past me; some glanced and then looked away like I wasn’t dressed in a Maleficent costume; some people smiled; some people stopped to talk or let me know I looked fantastic; and one little boy gave me a wide berth while never looking away.

I hope you had a happy Halloween, too.
Posted by LisaDay at 5:24 AM 3 comments