Readers of my blog will know I try hard to keep my son’s image and personal information out of this space.

So when I received a message from a representative from Ornge, the world’s innovator in the emerging field of transport medicine to speak at a launch of their program in Markham, ON, I hesitated.

I hesitated because by agreeing to attend their event, my guy – and his story of survival - would no longer be private.

While we would love to donate both to Ornge and to the Hospital for Sick Toronto for saving our son’s life two and a half years ago, we, at this time, cannot. So instead, I figured by making myself available to tell E’s story, it was a way to tell the world about the great things Ornge does for sick children.

Yesterday was the event.

There was also a slideshow of pictures when E was sick, but on the mend, and from now when he is considered cured.

A representative of Ornge read E’s story and my belated letter of thanks to the team that ensured E survived the journey from Markham Stouffville Hospital to SickKids.

I confessed I sobbed, sobbed when I thanked – via letter – the Ornge team for ensuring E made it to the hospital safely and for ensuring he wasn’t alone. It still makes me cry.

E had a blast. The Flying Lion (thanks A) mascot was a hit; the stuffed flying lion toy that each child who is helped by Ornge receives is still being carried around; and E got to check out a critical care land ambulance; sit in the front seat; talk through the sound system; play with the siren; sit on a stretcher; go in the elevator; check his lion’s blood pressure and heart rate (sadly it was flat lined); kiss a baby; be interviewed; have his picture taken; and basically be the star of the show.

Yes it’s ironic I have been so careful about Ethan’s information, but I am so glad we went and hopefully helped out a program that Canadians are so lucky to have.
Posted by LisaDay at 5:57 AM 10 comments

Spring Showers Do Bring May Flowers 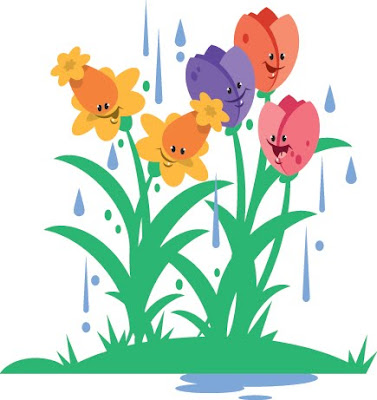 Last night I drove home to a black sky. As we pulled onto our street, that sky opened up and brought with it rain that fell fast and hard.

So hard that when it had rained itself out and the sun decided to show itself after almost a week of wetness, the cedar leaves that litter our driveway were pushed down, leaving what looked like waves of debris all the way down to the road.

As I was driving my stepdaughter and her boyfriend to his cottage later that evening, I noticed another thing the rain brought – apple trees full of flowers.

Welcome spring.
Posted by LisaDay at 4:51 AM 4 comments

Rain, Rain Go Away, The Long Weekend Is Almost Here 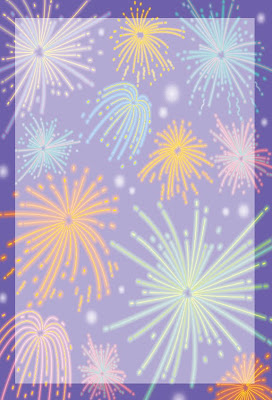 It has been raining since Saturday. Saturday itself was a heavy rain from mid-morning all the way into Sunday.

This week has been rain most time with a few sunny breaks and then more rain.

Saturday, the beginning of the first unofficial long weekend of summer, is supposed to be the best day of the weekend – sunny and warm. It is likely more rain for Sunday and Victoria Day Monday.

But rain or not, a long weekend is nothing but a good thing.

This sucks - this being the price of gas.

Gas prices jumped six cents a litre overnight, bringing the cost at the pumps to $1.39 a litre.

Sadly, my rise won’t even cover the increase at the pumps to get to work each day.

This sucks.
Posted by LisaDay at 5:30 AM 8 comments

I am not sure if it’s arrogance or just a complete disregard for people other than oneself, but I thought it was time to speak up and perhaps encourage people to think about others first.

What has surprised me – although not shocked me – recently are people who go to real estate open houses.

My brother and his family recently sold their house and currently two of our direct neighbours are in the process of selling theirs.

While I appreciate people need to look through closets, attics and tiny spaces to get a scope of the layout of a house and turn on appliances and fireplaces to ensure they work, there are certain things you do not need to look through or touch such as inside dressers drawers or, in the case of my nephew, baby monitors.

And until the keys are in your hand and money is in the seller’s bank, this house is not yours and you need to treat it with respect.

Take your shoes off so you don’t track dirt through the house; if you turn on an appliance, such as a gas fireplace when it’s warm outside, turn it back off before you go; don’t touch things that don’t belong to you; and leave your pets at home.

Yes, on Saturday I watched a potential neighbour get out of her car with a dog on a leash.

I realize people treat their pets as people – I do, too. But this is not your house. Regardless if this house seller has a dog, you have no right to bring your pet into someone else’s house.

Is It Wrong to be Happy When I Should Be Sad? 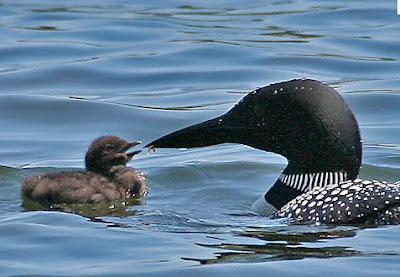 The other morning as we were getting into the car, I heard the haunting sound of the loon as it flew over our house.

The loon, the beautiful black and white bird that graces the face of our loonie, a $1 coin, is a symbol of Canada’s north. 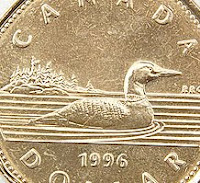 The loon is usually found in the lakes of Muskoka or Algonquin Park, three to eight hours away from our house.

For the last couple of years, I have heard the cry of the loon on Lake Simcoe and have been lucky enough to see it swim by us.

While the seeing – and hearing – the loon bring brings me joy and happiness, I am also sad. Why is the loon traveling so far south? Have we destroyed our majestic north and the birds now have come here? What can we do to ensure this wonderful creature thrives in this country?

And as I am so pathetic, I do not know how to get a YouTube video here. Instead, I am attaching a link that will direct you to a YouTube video so you can hear the sound of a loon yourself: http://www.youtube.com/watch?v=4ENNzjy8QjU
Posted by LisaDay at 5:20 AM 6 comments

He’s Not A Killer, Unfortunately

There was some action at our house yesterday.

My son was playing playdough while I was getting ready for work. I looked down and Cosmo, the cat, was running through my guy’s bedroom. After asking Cosmo what was up, I realized he was chasing a mouse.

I calmly picked my son up and put him on the chair and joined him there as Cosmo chased the mouse around my son’s desk, under the chair, down the hallway and into our bags I set at the door.

My guy wanted to see the mouse. I wanted to make sure the mouse wasn’t in my work bag. I told Cosmo to get the mouse, not to play with it but kill it.

The mouse ran out, through the banister and into our couch.

Our cat – the chaser and torturer of mice. (The first time this happened, the mouse was hurt. I have never heard a cry like that. I could hear it outside. It was awful.)

I told Cosmo that I expected to see a dead mouse when I got home, preferable sitting in the hallway and not in my shoe.

Mouse traps are next.
Posted by LisaDay at 5:12 AM 6 comments 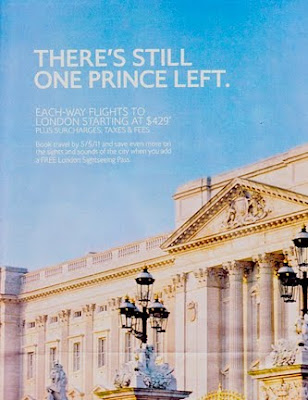 I must say, the full-page ad from British Airways made me laugh out loud.

The back-page ad suggested there was one prince left and offered a $429 ticket to England.