It's amazing what you will do - or not do -for your kids. I am not talking about giving your son the strawberries that come so infrequently from the garden so you only get a sniff as it passes by or sacrificing most of the peas the come from the same garden. No I am talking about the camera dipping, falling down the stairs sacrifice. Let me explain. On Sunday we went to my parents' house to celebrate a number of birthdays. My parents set up their kiddie pool and no birthday with kiddie pool is complete without water fights and my brother putting me in it. I was smart enough to take my iPhone out of my pocket, but I had my camera in my pocket for all those photographic moments. My son and my niece (who was just itching for her dad to put me in the water) started to splash me and then run away. So I ran after my guy and scooped him up, telling him I was going to drop him in head first. Sadly, I lost my balance and thought 'I am actually going to drop him head first and either break his neck or drown him' so I turned and landed in the pool, saving him but taking my camera for a swim. My camera - and card - is still sitting in a bag of rice drying out. I just pulled out the battery this morning and am charging it and, fingers crossed, the camera will turn back on. But more importantly, I am hoping my pictures can be retrieved. Then last night, my son got out of bed and was showing me a hole in his thumb. He apparently pulled out a sliver and I wanted to make sure he got it all out. So I picked him up and started to go down the stairs. I missed the bottom step and rolled on my ankle. I rolled somehow in mid-air, landing on said ankle but somehow saving my guy. Pre-kids I would have cried my eyes out, likely issued the rarely used swear word and been a mess the rest of the night. I did not cry last night, I merely asked my husband what my ankle looked like and suggested it was likely broken. And then, as I was lying on the floor, I made sure my guy was OK, looked at his boo-boo and listened to him tell me about his cheek, which he claimed he hit on the way down despite the fact the bansiter in question is on the other side of the stairs. While I did sit with my foot up, I also helped put our son back in bed and will carry on with my day today. Just call me camera-less limpy. PS - Is anyone else having troubles with spacing in blogger? I have put in double spacing and it's still one graph.
Posted by LisaDay at 2:46 AM 4 comments

People. It's 5:32 a.m. Tuesday and...it's dark outside. Noooooooooooo! A week ago, I am sure, at 5:32 a.m., we missed the sunrise. How could it be getting darker later in the morning already? Summer, I love you. Please stay, don't end any time soon. iPhone update Ok, I love the phone. I admit it's kind of nice to be at the forefront of technology for a change. And the phone is a lot of fun. So far I haven't become addicted. I don't look at it when I am with my guy, I don't spend my entire work day texting people and I don't often carry the phone on me. So far so good. One question, iPhone users. When you download your photos, are they upside down? In the camera role they are going in the right direction, but when I put them on my computer, they were all upside down. I took the time to flip them in a photo editing program, but when uploaded them to blogger, they were upside down again. Suggestions?
Posted by LisaDay at 2:38 AM 2 comments

Welcome to the Now 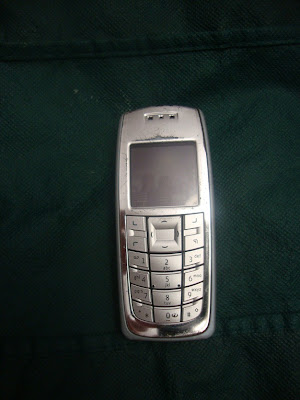 I like my cellphone. It works. I know how to use it. I can, if I actually wanted to, send text. It makes phone calls to let my family know I am home or call people to let them know we will be late. Yesterday, my husband bought me this: 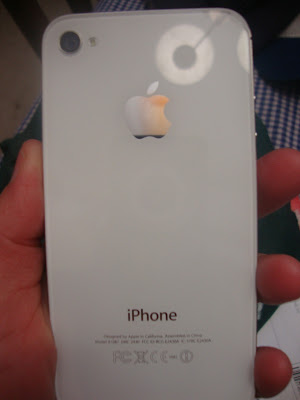 I also like this phone. It's too early to say whether I love it, but I think it will also serve its purpose - it allows me to text, which I did more last night than I have ever done in my life, make phone calls to let my family know I am home or call people to let them know we will be late. However, it also looks like it will be lot of fun. The Days are in the now. Look at us go.
Posted by LisaDay at 3:07 AM 2 comments

Thank you, Canada, for having a birthday

It was Canada's 145th birthday on Sunday, which means it was a long weekend for us.
And Mother Nature treated us well - blue skies and hot temperatures the whole weekend long. Saturday was soccer and on the way home we stopped at a garage sale and then did an inpromtu beach visit. The boys went in in their shorts while I stayed out taking pictures. We had to pull out guy out of the lake not because he was done climbing on rocks or jumping off the dock, but rather because his teeth were blue and his lips were chattering. 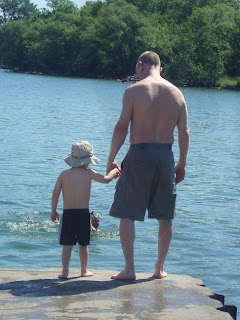 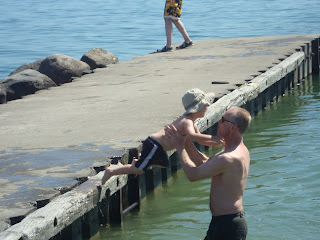 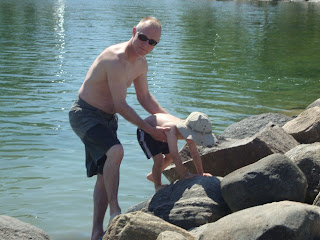 Saturday night there was a walk after bath and campfire were my guy discovered he liked our cooked marshmallows, particularly when they were wrapped in a graham crackers and chocolate.
Sunday there was a Canada Day party, but E.'s favourite part was not the hot dogs or cake - he didn't eat either - but the bouncy castle that had a slide at the end. As I was standing at the ladder ensuring he and the other little kids didn't get squished by the bigger ones - and the pillars that came knocked the children, big and old, over - I didn't see him go down the slide, but Jamie says he had a blast.
Sunday night, E experienced his first firework display in our frontyard and he loved it. 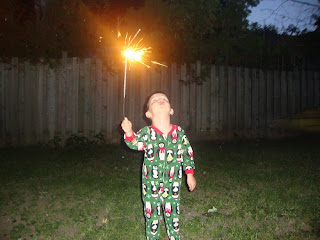 Monday included two trips into the lake in front of our house and backyard fun.
E. wasn't the only one Tuesday morning that wished the weekend was still here. I hope your Canada Day was fantastic, and Happy Independence Day to our American neighbours. 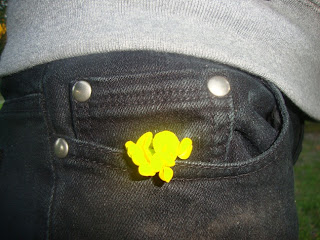